Want to know all about Saints Row perks and how to unlock them? Well, we got our hands on an early build of the game, and have had a first look at how the all-new perk system works. Long-term fans of the series are in the same boat as new players with perks, as the new mechanic replaces upgrades.

While there’s still a lot to learn about the Saints Row reboot before its August release date, here’s everything we know so far about Saints Row Perks and how to unlock them. Yes, perks are quite a bit more sensible and realistic than you might want from the Saints Row series, but don’t fret because Saints Row skills take care of your outlandish needs instead, including the ability to chuck a grenade down the pants of your enemy and yeet them into the horizon. Here, though, we look at how to buff your Boss’ health, damage, movement speed, and more.

Following your first effing day in Santo Ileso, you unlock your first perk slot, followed by your first perk when you complete a Mission. From there, you must earn some dosh to unlock the remaining four slots. Within your five perk slots are three separate levels: Minor, Major, and Elite. When deciding on your full perk build once you’ve unlocked them all, you can choose two Minor Perks, two Major Perks, and one Elite Perk. 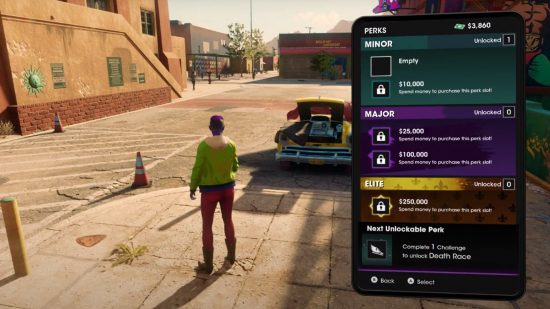 While the first perk slot is unlocked through gameplay, you’ll need to earn (and spend!) cash to open the remaining four. Provided you’re doing well with your criminal work, this shouldn’t be a problem – earning dollar (illegally) is the aim of the game, after all.

Your perks and perk slots can then be located on the menu on your cell phone, under the perks tab – obviously. Click on your available slot(s) to see every perk you currently have available. Your next unlockable perk can be seen under your slot list. 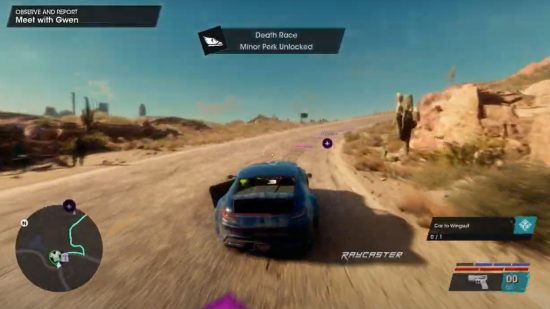 How to unlock Saints Row perks

Unlocking Perks is slightly different, requiring skill over just bank balance – though the two are intrinsically linked in Saints Row. Perks are unlocked as you complete challenges, with a specific number of challenges required for each. Challenges are also accepted from your cell phone menu, under Missions, and are small tasks that can be completed alongside larger missions, such as finding and photographing fast travel locations.

Known Saints Row perks and what they do

That’s all the perks we know of at the moment. Other potential perks that have been leaked but not confirmed include the ability to shoot more accurately from the hip, and automatic cash and ammo collection.

So there you have it, the new Saints Row perk system, and how it works. Once we’ve had a bit more time in-game, we’ll update you with every perk available and what it does. Until then, get the answer to the question every Saints Row fan has been asking, is Johnny Gat in Saints Row? And don’t forget to check out the Saints Row map before the game comes out, and get acquainted with the insanely cool Santo Ileso.

Ubuntu is now available on AWS

September 30, 2022
Microsoft Teams just fixed one of its most annoying call problems

Microsoft Teams just fixed one of its most annoying call problems

September 30, 2022
Twitter’s edit button is finally here – but not for everyone

Twitter’s edit button is finally here – but not for everyone